Controversial, cheeky and brave. The award winning artist Sarah Maple confronts her audience to take a stand on notions of identity, religion and what’s going on in the current world. Sarah walks through ten years of work during her current solo exhibition “I still wish I had a penis” in Gallery KochxBos. TittyMag founder Cathelijne Blok sits down with the artist on Zoom for a chat, a cup of coffee and their shared love of cats.

While sipping her coffee Sarah pops in the Zoom room.

“Hi Sarah!”
Sarah’s huge smile immediately fills the screen. She is sitting comfortably in front of a huge painting featuring herself and her furry cat Pudgy. Even before officially beginning the interview, we started chatting on her pregnancy, living in her hometown Crawley and of course the COVID madness.

We can keep on chatting the entire morning, but we’re here to talk about your celebration at KochxBos Gallery! It’s still not clear if you can attend your own party of the exhibition to celebrate ten years of your amazing body art. How does that make you feel?
“Oh, wow, yes ten years already! It’s crazy!”
Before Sarah can finish her answer, she is loudly interrupted by the doorbell.

“Sorry, that was the man with the COVID test! Something you have to also fix nowadays when you organise an exhibition.” She smiles.. “It’s by the way not a test for me! But for the delivery guy who’s shipping my work to the KochxBos!”

So much has happened! Can you choose a favorite moment from all over these years?
“Difficult, but perhaps when I won a grant from Sky Arts in 2015. That moment gave such a boost to my career and direction as an artist. It was a big mentoring and financial opportunity for me to make a new exhibition! The work I created in that period will also be shown in this anniversary exhibition. It was such a huge moment, because I had no money, was having another job and was trying to juggle between it all. So this gave my career and myself an important push to keep on going. Support in every way is sooo important for an artist. It’s necessity to surround yourself with people who believe in you like Esther and Hans from KochxBos did, and still do!”

Can you still remember your first encounter with Hans and Esther?
Sarah starts laughing again while answering the question.
“Oh yes of course.. The moment we met the house was on fire! We had an instant click and that’s rare for that to happen! I remember my husband Jaimie, Hans, Esther and I all met in a very beautiful, but strange hotel in Amsterdam. I think it used to be a mental hospital, and we’ve been friends ever since! In the art world it’s important to have that network and people who back you up. It took me a lot of time in the beginning to create that, because I was so young and I just didn’t understand that it was so important and where to start with all of this.” 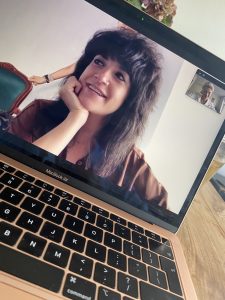 How important is that overall support and recognition as an artist?
“As an artist you work on your own a lot and for someone else to say something supportive about what you create is so meaningful. I know now whom I can turn to for questions, reactions on my work. Sometimes I try to find that same reaction on my social media. Which can be quite helpful, but nowadays it can be very different from what it was ten years ago. In that time I was a lot more daring, because there were fewer people on it and it didn’t have such an imprint. Currently I think about everything before I even post something cheeky online. I already try to guess what the people’s response is going to be. Although it can be really helpful! Sometimes someone points out to me something I haven’t thought of. And even if it’s negative, I can rethink the work or try to understand that view. For me the work is an ongoing conversation with the audience and having that dialogue and reaction. Although I’m continually trying to keep the balance between what I want to say with my work and what social media expects me to do.”

And you say a lot with your work! From BREXIT, integration, equality to feminism and religion. How important is humor in your art to put across a message?
“For me humor is really, really important. You can say so much with it. Even if I watch comedians for example, a political message can stick with me even more because they tell it in a certain way. I love it when humor is being used as an important tool to convey that message. My work, The Opposite to a Feminist is an asshole (2009), is for me a great example of that. It’s funny and provocative, but tells an important story on feminism. I made a lot of provocative pieces over all of those years, but this piece still gets the most reaction! I’m quite surprised that the reaction now is still shocking! I expected feminism in 2021 would be used to talk about. Perhaps it has a lot to do with the lack of knowledge on the matter. In all of those years I started reading more and more to also teach myself in an academic matter on feminism. Feminism isn’t just one thing and has so many angles. So it’s good for me to look at other people’s points of view. Of course I don’t agree with everyone on everything, but we’re all on the same team”.

Can art be a way of connecting people with those different intentions and opinions?
We get interrupted by a dramatic meow. “Sorry. He acts a bit like a toddler. Perhaps the cat is preparing me for motherhood!” She gently pats the little fluffy cat while answering the question.

“Art does have a huge role to play in all of this. I use art to process what’s going on in the world. Sometimes it takes a while to process it all. But art can create an environment for people to experience their feelings on an important matter. It’s vital that we keep on talking and creating those safe environments for people to raise their voice. We have to keep on talking, even when it’s uncomfortable and we don’t agree. That can also be a good thing!”

Your latest work, which will be shown during the exhibition in KochXBoS, is seen as strongly critical of the art world.. How was that for you personally as a starting young woman artist?
“Hard. And still is, but I started to rebel against it. I had a carefree attitude, because no one was taking me seriously. Even in art school women weren’t taken seriously and that’s why I started to create feminist work in the first place. I remember one school day that we had to talk about our work in class. When the men spoke everyone listened, but no one paid attention when the women did. Even though a lot of the women had more interesting things to say. I even recall that the thought crossed my mind wishing I was a man at that moment. This experience became a strong trigger for me and eventually was the kick start of the piece ‘I wish I had a Penis’ and all of the rest of my work comes from a feminism perspective since that moment. I didn’t recognize it as feminist in the beginning. It was a feeling and a reaction to what was happening around me in art school. In the end all of my work is always about equality and how to create that. And if I wasn’t a feminist I wouldn’t have been able to make these political engaged works at all.”

How important is that representation in the art world?
“Representation is vitally important! And that stresses me out! A couple of years ago I visited MOMA in New York. And in their permanent collection I could only find the work of one woman and that’s it! My partner was the first of us to point it out! Walking around these works made by white men, it felt like we women didn’t even exist. As if our lives and stories had been erased. Sometimes I don’t even know where to begin to balance that. You see some changes in the art world and museums because they have to otherwise people will call them out on that. But we’re not moving fast enough. I always judge a gallery by their representation of artists. If they only represent white men, I just don’t want anything to do with that gallery. It’s so tunnel visioned and it seems they can’t see anything else. That’s quite frustrating. For me it feels so comforting to look at the work of other women artists such as Barbara Kruger and Paula Rego. It’s essential that there is that equal representation so everyone can relate to a work, an artist or a story.”

You covered a lot during those years.. Does it pressure you to respond to everything that’s going on in the world?
Sarah takes a deep and long breath before answering this question.

“It’s difficult. I’m a very positive person, but at the moment it’s hard to stay positive in this worldwide madness. Sometimes it looks as if the world has gone crazy: Trump, BREXIT, social media, polarization, everything that’s going on in Afghanistan. Whenever such a political and horrifying event happens, it feels so close to my heart. I don’t even know where to begin. That horrible situation in Afghanistan shows how quickly something can be taken away. Equality and its protection is an ongoing battle. I must respond in those situations, but sometimes I don’t know how! In some cases it feels appropriate to wait and figure out how to articulate that. Those huge and crazy events take time to process and come out in a longer way. I know you don’t always have to respond directly as an artist, but for me it’s hard not to make art as a reaction to a big world changing.”

In the meantime Puggy the cat is seeking Sarah’s attention by parading around in front of the laptop.

A world filled with stories on inequality and continuous political shifts, wars and other horrors. But you’re also becoming a mom. That must offer even more inspiration for your art!
“Motherhood… There’s so much about that already. People saying I can’t do this and that before I even have the baby. I feel the expectations as a woman and becoming a mom even more. I feel there’s going to be an entire body of work on that alone! I’m even making gender assumptions about my own baby! For example, I really wanted a girl and I’m having a girl. But I’m already planting stereotypes on this unborn baby by talking out loud that she’s going to look cute or sweet!”

Before Puggy wants all of your attention, one last question. What would you like to say to the future Sarah in another ten years.. Perhaps at the party for your 20th anniversary?
Sarah smiles and after we start making jokes on a virtual Sarah at her own anniversary party, she answers: “Probably I would like to say to that Sarah; well done! But also that everything is going to be all right! As an artist you’re never sure how your life is going to turn out. The kid will be ten by then and I’m so intrigued how it’s all going to turn out, being a mom and an artist, but we’ll see!”

You can visit the exhibition I still wish I had a penis – 10 years anniversary exhibition at KochxBos Gallery in Amsterdam till october 2 2021.